I'm starting up a new fantasy-type competition for this 2013 season, aimed at all of you NFL diehards/dorks/enthusiasts. I want to see who the best prognosticator in all the land is.

Goal: I really like how fantasy football gives fans the chance to follow different players from across the NFL that they wouldn't normally care about. The objective of this league is to give you a reason to care about the outcomes of games from throughout the league that you might not normally care about.

Over/Under NFL Team Regular Season wins - In this league, you will select either the OVER or the UNDER for each of the 32 NFL teams before the season begins. I will provide the master list (shown below), providing the specific number of wins for each team.

Smallprint: You CAN push. Example: Arizona's over/under is at 6. If you're confident they win 6 games exactly, then you may pick PUSH. If they win 6, the PUSHers would receive 1 point, while both the OVERs and the UNDERs would receive 0 points.

Swap: For the first 9 weeks of the season, you will have the opportunity to make a "swap", essentially switching one of your picks from OVER to UNDER or from UNDER to OVER (or PUSH, if you so desire). You can only make 1 swap per week. You can choose not to make a swap. You will not receive an extra swap the next week, NO carry over.

Locked in: Once you swap a pick, you cannot swap them again for the rest of the season. That pick is locked in.

Penalty: There will be a 1 point penalty for missing a swapped pick. Example: Chiefs look bad in Week 1, you switch your pick from OVER to UNDER. They end up going 15-1, you receive -1 points.

Confidence points: For the first 9 weeks of the season, you have the opportunity to add 2 "confidence points" to your picks - 1 for an AFC team and 1 for an NFC team. Any confident points added to a correct pick are added to your final total.

Max - You can only add 2 confidence points per team.

Smallprint - Any confidence points added to a pick before swapping that pick at a later point are negated. Example: Add 1 confident point to "Seattle OVER pick" following Week 1, swap from OVER to UNDER following Week 6, and then get the pick correct - only receive 1 point. The prior confidence point was forfeited.

Payout - 100% redistribution, dependent on number of entries. I no want no money.

Earlier this week I was feeling lazy. I didn't know if I'd be able to write about The Challenge. I mean, this is the time of year where I'd prefer to save up all my ambitious energy and B my L all over football season. Maybe nobody would even notice if I just quit writing these.

Until a man reminded me of something very important. A man whom I'd consider to be an idol of mine; a life coach if you will; a mentor for any of us who have ever felt down, questioning whether we'd ever get back up again. Of course, I'm talking about The Teej here...

TJ HAS A LIST OF PEOPLE HE'S NOT FEELING!!!!

And yet, somehow, someway, TJ Lavin didn't even get nominated for Outstanding Host for a Reality Program. The game is rigged, man.

In lieu of this inspirational quote from our Challenge Commander in Chief, I thought we'd run down the best quotes heard recently on this week's edition of....

We start with the verbal climax of the most one-sided fight in Challenge history (because a fight couldn't possibly be more one-sided) between Trishelle and Aneesa from two weeks back. Trishelle was upset that Aneesa was "everything," in reference to her being both black and jewish, and in the heat of the moment, unleashed this unruly nonsense. I can only imagine how many perfectly phrased insults were logjammed within Trishelle's brain at the time, only to suffer a nasty case of verbal diarrhea for everyone to see. Then Aneesa put forth the most nonchalant (yet, effective) forearm shiver I've ever seen, straight to Trishelle's grishelle, leading to her immediate departure in a mystery car parked in the driveway that she had the keys to for some reason. The Challenge is the best.

2. "I will fucking melt my toothbrush down and stab his ass." -Knight

I am enjoying the Knight era. Dude reminds me of a cartoon character. A cartoon character who says whatever he's thinking all the time. He also drinks beer out of what appeared to be a Brita water jug while swimming in the pool this week. Outstanding. However, Knight isn't only awesome away the Jungle, he's also pretty gnarly within, deciphering the key strategy of going low in what has been my favorite Jungle challenge so far, the blindfolded light-sabering sumo match.

You gotta love that thought process. As I was watching the episode, I even questioned aloud whether The Challenge has ever had a pain-inducing challenge like what was teased to us. In other news, Nany is the latest rookie to suffer from the CT Virus. There is no known cure. Seriously though, CT preys on rookie girls on The Challenge the same way ketchup does on Jemmye.

The rookies representinnnnnnnnnnn'! I think if you watch the Real World season that precedes The Challenge, you actually feel a sense of pride in the rooks doing damage. And in this case, doing damage means scoring with every guy/girl/houseplant/hot tub jet in the crib! They're killing it. They even won the challenge this week, but I'm not so sure it was in their best interests to do so. If the Jungle was on the line, then of course you'd like to win, but this only seemed to widen the target on their backs, a sentiment echoed by CT. They better win next week, or me thinks they'll be going in to the Jungle no matter what.

6. "Emily and Paula have won three challenges in a row and I'm so over it" -Nani

So, pretty much the way I feel about Alabama winning National Titles* (*with a loss). Even if Emily and Paula ever actually lose, it's not like the girls will be able to throw them in to the Jungle, because it's the guys who will decide. And the guys are on their side. They're basically in the final Challenge already. On top of that, Paula was seen dominating this week's mid-commercial segment, winning a mini-challenge by stuffing what appeared to be 8-10 humongous grapes in her mouth. Now, if this were a tasteless blog, this would be the exact sentence where I'd craft a joke about Paula's ability to fit multiple things in her mouth at once. Thankfully, I have more class than that.

7. "My inner dating site is triggering an algorithm that says you guys are compatible" -Wes

Quite possibly the dorkiest statement to ever come out of somebody's mouth. Who says this? He was talking about Leroy and Jemmye, who were fixing to hook up until Jemmye went all cray cray and scared away Leroy (along with any chance at Leroy's babies). But there was somebody looming in the on-deck circle: Hey, Theresa.

8. "This will scare bitches in the Jungle, that's what the hair's for" -Jasmine

Not nearly as scary as this…. 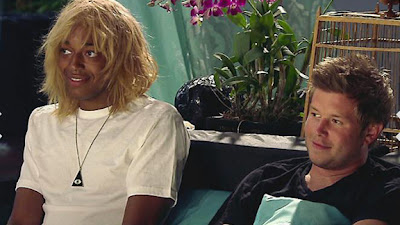 9. "This bamboo pole is like trying to navigate a fat woman through a grocery mart." -Preston

That's not AT ALL what the challenge was like. Needless to say, they got dead last.

10. "I feel like I'm moving into an apartment with really oddly shaped furniture." -CT

Analogies might be the biggest difference between rookies and vets.

11. "I actually have a battery pack and I hook that shit to my nipples." - Cara Maria